What  comes to mind when you find out a person has been married five times? I thought, Oh…there’s got to be a bit of scandal here. Did a wife or two run off? Did one wife, or two wives, or more wives, meet mysterious ends?

Now I feel a bit ashamed of my suspicions, for the true story of five-times married Benjamin Franklin Hathaway calls to mind Lemony Snicket’s A Series of Unfortunate Events – minus the snark.

Benjamin F. Hathaway was born on May 1808, in Freetown, Massachusetts. He was the seventh known child, and fifth known son of Jael and Mercy (Davis) Hathaway. Like most families in the early American republic, this Hathaway family of middling circumstances, farmed with all able bodies pitching in. By 1830, Jael (and Mercy) were empty-nesters, all their children flown.

Benjamin probably left home in his early teens. The youngest of five Hathaway, sons, his future depended on acquiring a skilled trade. It’s likely, his father, Jael Hathaway (or someone in the family circle) found the boy an apprenticeship with a master carpenter and that would lead him away from rural Freetown. In the southeastern Massachusetts of the times, the action was in the village of New Bedford. There the whaling industry would expand opportunities for many workers, and the favored few with capital would reap incredible riches. 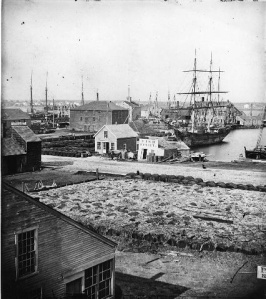 Whaling grew New Bedford, MA from a village into a bustling city with great wealth.

Benjamin F. Hathaway plied his carpentry skills on A. Robeson’s wharf as a ship joiner, and found employment as a house wright, during the 1830s and 1840s. But Benjamin wasn’t content to remain an employee. Sometime before the year 1849, he partnered with Thomas Booth to establish Booth & Hathaway, house-wrights and ship joiners.

That year’s enumeration shows that Benjamin F. Hathaway owned real estate valued at $18,500 and personal property worth $2500. For perspective, compare this with the state of my direct ancestor, John P. Roane, a grocer in Lowell, MA who listed $1000 in real estate and $200 in personal property in that same 1860 census. Yeah, Benjamin had done well for himself (of course, it helped that he was American born and Protestant).

During the next years, the nation suffered the bloody War of the Rebellion (Civil War), which affected business and fortunes, for good and ill. Things changed for Benjamin, for at the end of 1865, he pulled out of the lumber market and launched a new venture in coal, which appears to have been a sound move. Benjamin became a respected member of the New Bedford Board of Trade.

Hathaway Coal employed 10 men in operating that coal business at 590 Acushnet Avenue through 1889, the year before Benjamin died. Among the assets mentioned in his will (1888), there is…

“real estate situated on the east side of Acushnet Avenue at the foot of Willis street in said New Bedford and known as the wharf property.”

Benjamin never completely retired. After 40 years as a proprietor, his company would keep him engaged to some degree, even as he entered his eighth decade.

In many respects, Benjamin Franklin Hathaway emulated his Boston-born namesake (Benjamin Franklin, 1706-1790). He mastered a trade, kept learning, worked hard, and leaped when he recognized an opportunity. With persistence, Benjamin dramatically improved his material circumstances.

Ben wasn’t all about business, not by a long-shot. That he married a series of five women, and sired (at least) 15 children is evidence that he pursued ambitions on the domestic front with as much zeal and doggedness as he did commerce. This part of the story begins with this transcription from New Bedford vital records:

Benjamin turned 26 in May that year. He had worked perhaps, 10 years, to become a reputable ship joiner and house wright, a man able to support a wife – and a family.

Sources and / or references: