My father taught us that Irish Americans should be proud and sing “When Irish Eyes are Smiling” every St. Patrick‘s Day. Because  the genealogy bug me didn’t bite until long after his death, I hardly knew more than that about my Roane roots. For help, I wrote the only elder Roane I knew, “Uncle Paul,” who was, unbeknownst to me, my dad’s cousin. Paul Roane, Senior graciously provided all the names and dates he knew. He even created hand-ruled trees. So I learned the founder of my paternal line in Lowell, Massachusetts was John P. Roane, who  died on November 28, 1869 when he was 38 years old.

Armed with sketchy facts in living memory, I dove in and harried city clerks and librarians in places far and wide. I fleshed out the Lowell families. I contacted and reconnected with “lost” cousins.  However, I was confused by my inability to document that precise date of John P. Roane’s death.

I pictured my ancestors as typical specimens of the 19th-century poor and struggling who were drawn to the world-famous mill city. In 2003 I made a pilgrimage to the consecrated ground of St. Patrick’s Cemetery that held so many weary Irish bones. I prepared myself for the possibility there was no Roane marker to see, knowing stones were (and are) expensive, but after making inquiries, an administrator marked a map, handed it across the counter, and waved me cheerily out the door.

Two minutes later, I stood flabbergasted. An embarrassingly immodest granite monument rose up from the Roane family plot (photo below). Okay, I’ll push  aesthetics aside; the discovery must be assessed within its historical context. During the Victorian era, ostentatious displays told beholders you were successful. Though my Roanes always lived in working-class dwellings (some still stand), – in death, they communicate a powerful desire to be remembered as people of substance and importance. But I digress. 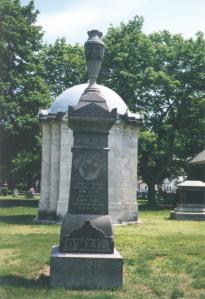 Beneath a crown with a cross thrust through it, carved into the polished stone, you can read:

Here was the reason John P. Roane was not forgotten, but he wasn’t buried here. This plot was purchased in 1894, 25 years after his death. Frustration flooded over me. I’d searched in Lowell, other towns and cities, in state repositories and online databases with no result.  I still had no death record, no funeral notice, no obituary. I burned to know exactly where he came from, what happened to him, and why. But that day I couldn’t think of a place I hadn’t already looked. John P. Roane’s end and origins were lost to history and it was time for me to move on.

I shifted my research focus to John’s widow, Mary Hurney. She moved on with her life by marrying a Civil War veteran named Patrick O’Neil in 1873. The remarkable Mary out-lived him, too. (In fact, Mary out-lived all but one of nine children and every one of her 13 siblings).

Patrick O’Neil suffered a myriad of debilities arising from his military service. Doctors declared him unable to work and he collected disability payments in his last years. After he died in 1896, Mary applied for her widow’s benefit.

The federal government used fill-in forms for these applications, so when I ripped into the NARA* file, I was surprised to find pages of handwritten testimony. Like any claimant, Mary had to prove that a US soldier was dead and that she had been his wife. Mary produced death records for Patrick O’Neil, his two former wives, and a marriage certificate. Legal difficulties arose because Mary had no death record for first husband, John Roane.  She needed sworn witnesses to the facts surrounding John Roane’s death. Then WHAM! it felt like a lightning strike** when I recognized the surnames, JONES and HILLARY. I read…

Bits of information I’d collected over years, but could never tie in, began falling into place…. Witnesses at baptisms were often relatives…  There was no death record, because John did not die here.

Tuberculosis (TB), also known as consumption, or phthisis, was the scourge of the Roane family and remains a potent killer. Before Robert Koch discovered its cause in 1882, treatments included the ‘work cure’ (eating basic food and performing manual labor in the outdoors). And if you had money enough, you might take the ‘travel cure’ to experience a restorative change in climate.

I can’t know that John Roane had TB, but he was treated for an ailment like it. Though a grocery store owner since 1859, at the birth of daughter Sarah in 1868, John gave his occupation as mason ( hard labor). Then the cousins’ testimony that  they accompanied him to Ireland in the of spring 1869 fits the pattern of TB ‘cures’ of the time.

These facts we know because we were intimate with him and with him constantly until he breathed his last…and was buried in Colmanstown, Galway Co. Ireland.

Lastly, a cousin told me Aunt Mollie said the Roanes came from Athenry…  When I searched online for  Colemanstown, it turned out to be a tiny settlement. The nearest town to it is Athenry.

And so a genealogy mystery was solved in a way that reminds me of a stargazing trick. If you stare straight at some celestial objects, you cannot see them at all.  However, when you avert your vision, that is, look slightly side-wise, – they magically pop into view.

*This cemetery was referred to as the “Cath yard” by Yankee record keepers.

***Lightning did strike Patrick O’Neil, – but that’s a story for another day.