Who can look at a portrait of historian, genealogist and general, Ebenezer Weaver Peirce (1822-1902) and not wonder what he was like in life? As a white, privileged, nineteenth-century male, obsessed with research, we might suppose Peirce was a social bore whenever he was away from his Old Colony club fellows. He was honored in the public sphere, beginning in 1867 when the E. W. Peirce Encampment, Post 8, Grand Army of the Republic (GAR) was established in Middleborough. In 1880, he was elected selectman of Freetown. He might well have been stereotypically stodgy, but Ebenezer stepped outside conventional lines a number of times.

Evidence for indecorous behavior (and a hearty sense of humor) came early in his Civil War service when “He was court-martialed for presenting burlesque shows to the troops of his command.” (He was acquitted at trial.)

Ebenezer widened his horizons through travel in the American South and West. Interactions with people from different backgrounds and cultures had lasting influence. For example, while virtually all the residents of rural Freetown were white, here’s an interesting snapshot of the Peirce household from the 1865 state census:

What Ebenezer’s wife, the former Irene Isabel Paine (1825-1900), and son Palo Alto Peirce (1853-1931) thought of this arrangement is unknown. How they reacted to the return of a husband and father with a mutilated body and life-long handicap is another good question.  Adjustment to life with one arm was hard enough for the vigorous, 40-year-old army commander (he continued to serve through the war), but adjustment for his wife and son may have been harder.

The 1870 US census shows the family together, however, on May 1, 1875, Irene was granted a divorce from Ebenezer. In June 1875, their son, Palo Alto married, suggesting dissolution of the marriage was arranged amicably. Ebenezer remained on his estate, and Irene moved back in with her mother and sisters in the same town.

Zerviah Gould Mitchell (1807-1898) was a Native American woman who commissioned Peirce to write the 1878 book, Indian History; Biography and Genealogy, Pertaining to the Good Sachem Massasoit of the Wampanoag Tribe, and His Descendants.

As a handicapped divorcee, ambling about a near empty house, Ebenezer likely welcomed a project to which he could bring exercise his research and writing skills. He surely thrilled to work with Mitchell, a direct descendant of the Massasoit who met Peirce’s own Mayflower ancestors.

The remarkable Mitchell was (briefly) a private school teacher, a wife and mother, and a lifelong advocate for native land rights. When she engaged Ebenezer Peirce to write the history, she was 71 years old, and as she explains in the book’s preface,

“I have come to the conclusion that Massachusetts does not intend to do me justice through its legislature… Before going to my grave, I have thought it proper to be heard in behalf of my oppressed countrymen.”

At a time in which bigotry against non-whites was the norm and the notion of the equality of women was laughable, that Ebenezer chose to collaborate with Mitchell was also based on his sense of justice. Zerviah wrote of Peirce,

“He feels, and has long felt, that the whole white race on this continent are vastly indebted to the aborigines of this country…and he most cheerfully joins in doing what little he can to cancel that indebtedness.”

It’s most likely, around the time of his divorce (1875), Ebenezer hired Virginia-born, former slave, Amanda Watts (born about 1843), to run his household. Though details have been lost to time, Ebenezer met Watts when traveling in the south (possibly, Washington, DC) and where Amanda was employed by a lodging house. She so impressed him with her competence that he persuaded with her to come north and become his housekeeper. The younger woman also impressed Ebenezer with her sensitivity regarding his physical limitations, for she assisted him with personal tasks in addition to running the house.

In the 1880 US Census, the Peirce household is comprised of 58-year-old Ebenezer and 37-year-old housekeeper. Amanda held her position for the next 12 years. In 1892, quiet domesticity was shaken up when Ebenezer added a new young bride and mother-in-law to the mix. It did not go well. (More to follow.)

Despite the upset, Ebenezer stood by his faithful servant. A provision of his will gave Amanda Watts a lifelong right to a house on the estate, at no cost. She never married and died of heart disease in the house Peirce provided for her at the age of “80 thereabouts” in 1922.

Never too Late for Love

A few doors down from the Peirce place (as seen on that 1880 census), lived Mary Ann (Chase) Gardner, widow of Jeremiah Gardner, and her three children. The eldest, a daughter, was Ida Estelle Gardner (1863-1945).

Ebenezer watched the teen grow to adulthood and become a school teacher. With an educator’s mind, Ida would have appreciated the literary accomplishments of the valiant, old soldier. How these two people, so far apart in age, grew close isn’t clear. As a factually inaccurate “Special Dispatch to the Boston Herald” in November 1892 describes it,

“The general is 74 years old and practically an invalid. About a year ago, thinking he was going to die, he expressed a wish that he might be married to the lady of his choice, Miss Rose Gardner, a school teacher in Assonet.”

Another account implies Ida’s motive for marriage wasn’t pity, rather,

“Gen. Peirce wooed and won the hand of Miss Gardner, a young school teacher of good family. They were married in great state while the groom was propped up with pillows in a chair, only recently having recovered from a severe scalding accident in which his arm was frightfully hurt.”

Whatever the state of Ebenezer’s health, marriage to a woman 42 years his junior was a powerful tonic. Evidence his spirits and health revived is found in the 1900 US census which shows Ebenezer and Ida had a child together. (The unnamed child was stillborn or died soon after birth.)

Along with the sweet things Ebenezer enjoyed late in his life, came domestic discord that turned into public embarrassment when his long-time housekeeper and Ida’s mother, filed suits against each other in the Fall River court, designated legally as Amanda Watts v Mary A. Gardner and Mary A. Gardner v Amanda Watts.

The Boston Herald acknowledged the racial component in its coverage:

“The charges in both cases were assault and battery and under ordinary conditions would attract no attention. Amanda Watts is a colored woman who was once a slave.

“Two weeks after the marriage, Amanda Watts left the house and occupied a dwelling provided for her by the general. Mrs. Mary A. Gardner, his wife’s mother, assuming the place made vacant by the colored woman’s retirement. Miss Watts visited the house many times, insisting on holding private interviews with her former employer. These proceedings became distasteful to the young bride, and eventually, there came domestic quarrels in which the general sided with his wife. This action caused the negro woman to become jealous, and the cases tried today show that she made an onslaught on Mrs. Gardner, who, to protect herself, was compelled to throw a pot full of hot tea at the crazed woman.”

The paper characterizes “the negro woman” as “jealous” and says the “crazed woman”  “made an onslaught.” While the white lady’s hurled pot of hot tea was “to protect herself.” Hearing contradictory evidence, the judge found both parties guilty and split the court costs between them.

Ebenezer tried to prevent the scandal. He was able to get the first complaints for disturbance and assault made by his mother-in-law against Amanda dismissed, and he paid the costs. Though he desired to please his new wife, Ebenezer understood that after 18 years as his personal servant and housekeeper, the relationship that existed between himself and Amanda Watts couldn’t simply be turned off. 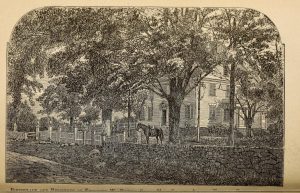 August 14, 2017 marks the 115th anniversary of Ebenezer W. Peirce’s death. In addition to my gratitude for the genealogies and sketches Peirce left to posterity, I wanted to add respect that he acknowledged injustice and oppression in his time and never defended it. I love that he screwed up occasionally, because that makes him human. As a rich, white guy, he had advantages. He also lost an arm on the battlefield, and got right back to the war. He raised a fine son, and let an unhappy wife go in peace. He kept on writing. Then wham! as a septuagenarian, Ebenezer let love in again. Some thought him a bit odd, but I think he was wonderful…well, all except those sideburns.