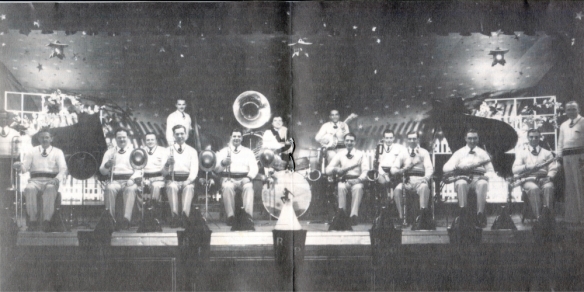 Frank Roane is at the far right of his band, Roane’s Pennsylvanians.

A recent link I stumbled upon at Archives.org brought to mind an exciting episode in Roane history that occurred when I had barely begun my journey.

I received a telephone call from an Al Giordano, who was a fan of early 20th century dance bands. He told me that BMG Music, when it acquired RCA Victor, inherited its properties. He had recording sheets from Studio 1, 24th Street, New York, dated January 28, 1932 and June 2, 1932, for sessions with Roane’s Pennsylvanians. In order to put together a new CD issue, he needed some authoritative information about Frank Roane. Wow.

I put out a cousin distress call and was able to get  my aunt to confirm that her Uncle Frank, AKA Francis J. Roane, AKA “Peach” Roane (1893-1942) was a master of ceremonies for weekly dances at the Commodore Ballroom in Lowell, Massachusetts. His signature schtick was delivering this announcement in an English accent,

(Clearly, you had to be there to get the effect.) A direct line cousin added that some evenings Roane’s Pennsylvanians played the Commodore, Frank’s daughter, Mary Katherine, would sing with the band. Though band leader, there’s no evidence Frank was a musician (he did have the Roane family gift for song). He was rather, a manager and promoter.

In naming the group, I suspect he chose to trade on the popularity of another orchestra known as The Pennsylvanians. Modest soul that he was, he appended his name, created a brand and earned a modicum of lasting fame in music history. The University of Massachusetts Center for Lowell History has a Commodore Ballroom Collection that contains sheet music and photos of  bands that played at there and Roane’s Pennsylvanians is included among the “excellent local bands.” They played regional gigs to popular acclaim, and got that RCA contract.

The CD produced by The Old Masters and issued in 2000, is called, Alex Bartha’s Traymore Orchestra & Roane’s Pennsylvanians. The songs Frank Roane’s band recorded in 1932 are all fox trots in the Hot Dance category. Among the song titles you’ll detect a hint of Harlem / Black culture:

Between the Devil and the Deep Blue Sea
Cast Your Sins Away, Charlie Two-Step
Chinatown, My Chinatown
Good-Bye Blues
Is I in Love? I Is
Sleep, Come On and Take Me
When You and I Were Young, Maggie
We’ve Got to Put That Sun Back In The Sky
Why Don’t You Get Lost?

There were great dance beats, novelty tunes that incorporated scat singing. The Victor label issued records by Alex Bartha and Roane’s Pennsylvanians under the pseudonym, Williams’ Cotton Club Orchestra to expand market appeal. In fact, jazz great, Cab Calloway and His Orchestra also recorded the then new Harold Arlen / Ted Koehler tune, Between the Devil and the Deep Blue Sea.

Click on over to Archives.org and you can listen to Good-Bye Blues.