A murder in the family always comes as a shock, even when you learn of it a more than a century after the fact. The victim was a first cousin (thrice removed), Philip H. Fitzpatrick, who was just 30 at his death in 1895. To make the matter worse, the affair was a nationwide scandal. The salient points appeared in newspaper headlines like the following from the June 5, 1895 issue of the Columbus Daily Enquirer (Columbus, GA):

A TRAGEDY AT THUNDERBOLT

The Proprietor of a Leading Gaiety Saloon

Killed By a Mount Vernon Lawyer. A Handsome Gaiety Girl Caused the Difficulty…

Newspapers across Georgia, in South Carolina, Illinois and California published versions the tale. On June 6, 1895, the story hit Philip’s hometown of Lowell, Massachusetts. The evening edition of the Lowell Daily News reported it like this:

WANTED THE WOMAN
——————————————-
Particulars of Murder of Philip Fitzpatrick.
——————————————-
QUARRELED WITH ANOTHER MAN ABOUT A GAIETY GIRL.
Fitzpatrick Broke into a Room, and in Return Received Two Bullets in His Body -The Murderer Arrested and Locked Up – Father and Cousin of Dead Man Go After the Body.

The catalyst of the tragedy was Helen (or Helene) Stockton, a singer and dancer who grew up in Washington, DC and whose real name was Emily Lazelle.[1]  We don’t know when Fitzpatrick hired her for his Savannah music hall, the Gaiety Theater, but she  became a fast favorite with the male patrons and Philip himself fell in love. 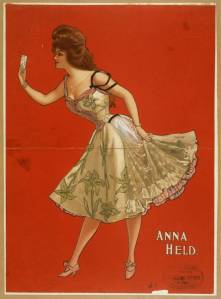 Anna Held was about Helen Stockton’s age in this 1899 poster from the Library of Congress Prints and Photographs Division. [2]

About six weeks before the murder, Helen left the Gaiety. Why? Philip might have popped the question out of the blue, sending the girl into shock. Or, in a less gentlemanly move, Philip might have pressed her to engage in an illicit affair. Either of those would be excellent reasons to quit a workplace. As it turns out, virtue and scruples didn’t play a big role in Helen’s decision.

At 19, in the bloom of youth and beauty, and a hit on the music hall stage,  why would marriage have any appeal for Helen? Wives of working men and tradesman faced a life filled with the endless drudgery of  housework, childbearing and child-rearing. The rare exceptions to the rule were wives who married into wealth, and Helen might’ve had that angle in mind when she hooked up with a Gaiety admirer named Charles Dixon Loud.

Loud was a somewhat shady attorney, [3] a 42-year-old Georgia native, [4] twice Helen’s age and married, [5] a fact he may or may not have told Helen. He set her up in a room at the Warsaw Hotel in the Savannah suburb of Thunderbolt. Loud provided horses enabling the couple to go riding in the countryside.

Meanwhile, back in Savannah….

Philip Fitzpatrick was dealing with romantic rejection (and, if reports are accurate, the loss of his theater star) by drinking. However, although intoxication was a critical factor in the events that led to his demise, it’s unlikely Philip was an alcoholic (another possible reason for Helen’s flight). The reasons lie in the ambitious young man’s history.

In 1890, at the age of 25, Fitzpatrick moved away from family in Lowell, MA to make his way in Savannah, GA. Within five years, he established a profitable saloon, and expanded into popular entertainment. [6] By all accounts, the saloon and theater were thriving.  A habitual drunkard wouldn’t have the self-discipline essential to secure financing and licenses, to select locations, hire staff, manage operations and cash flow.

However, there’s no question that on Tuesday, June 4. 1895, Philip Fitzpatrick stewed his brain in alcohol and fatally compromised his decision-making ability. He convinced himself that if he could only talk to Helen, face to face, she would agree to marry him.

The blow-by-blow of what happened was reported in the June 5 issue of The Constitution (Atlanta, GA):

This afternoon [June 4] Fitzpatrick, accompanied by some friends, went out to Thunderbolt, where he drank heavily. He declared that he would marry Miss Stockton, willing or unwilling. He first sent a friend to prevail upon her, but as she refused to consider the proposition, he determined to see her himself. Butler, the proprietor of the place, endeavored to keep him out, declaring that Miss Stockton had left the house. He found that she was still there, however. But still refused to let him see her, and the two engaged in a hand to hand fight in which Butler got the worst of it. The two were arrested by the marshall and were taken to the lock up, where they gave bond. Fitzpatrick promised not to go back to the house.

IN MISS STOCKTON’S ROOM
About 8 o’clock Colonel Loud, who had an engagement to go horseback riding with Miss Stockton, arrived, Fitzpatrick heard that his rival was in the house and became frantic. He forced his way in, and learning that Loud and Miss Stockton had gone to the latter’s room in order to avoid him, he rushed upstairs to the room and kicked and broke the door. He had a heavy stick in his hand and rushed at Miss Stockton with the stick upraised. He turned from her, however, toward Colonel Loud who was standing in the window of the small room, pistol in hand. As Fitzpatrick advanced, Loud fired a shot over his head to warn him. Fitzpatrick still advanced, and Loud fired a second shot striking him in the body. Fitzpatrick continued to advance when Loud fired the third shot, striking Fitzpatrick in the mouth and passing upward through the brain. Fitzpatrick fell and died in a few moments. Colonel surrendered himself to the marshall, who brought him to the city and turned him over to the police.

Wow, there it is, grim and gritty.  The above details are consistent across the dozen newspaper versions, but for a single element, that Philip threatened Helen before he attacked Loud, and I don’t believe it. Considering how well the scandal played across the country, had Philip actually tried to beat the girl, this affair wouldn’t have been billed a tragedy. I suspect the local paper steered the narrative in an effort to justify a violent homicide by one of their own, as an act of southern chivalry.

Charles Loud equipped himself with a loaded gun and shot his “rival” for Helen’s favors twice, the second shot to Philip’s head. After learning more about Loud’s behavior, both before and after the murder, I’m skeptical of the assertion that Loud’s first shot was intentionally aimed over Fitzpatrick’s head “to warn him.”

Loud was held by law enforcement, and went to trial for Philip’s murder in August 1895. He had a sympathetic judge and was acquitted.[ref] Loud continued to practice law and engage in land schemes, even managed a banana plantation in Honduras. He got to die of natural causes in 1927 at age 74.

Charles Loud’s legal wife, Rebecca Ann (McGregor) Loud, died in 1901 and in the decades that followed, Charles is found with a variety of “wives” on census records and newspaper notes. None was the woman over whom he killed a man. Helen Stockton, aka Emily Lazelle, the “Gaiety Girl,” or “vamp of Savannah,” if you will [7], likely changed her name again and disappeared.

The tragedy was doubled for Philip’s Fitzpatrick’s Lowell family

In the second headline about the Fitzpatrick murder in the Lowell Daily News, the last line reads,“Father and Cousin of Dead Man Go After the Body.” It’s a clue to the next awful thing to happen to my Lowell, MA ancestral folks. I’ll share the fresh bad news with you in my next post.

Lowell’s St. Charles Hotel, with the “best service in the city,” was young Phil Fitzpatrick’s first employer. Here he learned of a world beyond Lowell’s textile mills. [8]

[7] Wikipedia.com; “Hard Hearted Hannah, the Vamp of Savannah” is a popular song with words by Jack Yellen, Bob Bigelow, and Charles Bates, and music by Milton Ager, published in 1924.